An Evening with Melissa Errico: A Celebration of Love and Broadway 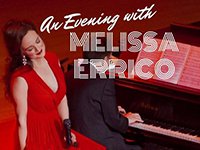 Tony Award-nominated Broadway Star Melissa Errico joins Cape May Stage for an unforgettable evening. Melissa will be performing some of her favorite love songs Broadway songs. “The Maria Callas of American musical theater,” as Opera News has called her, referencing both her crystalline voice and dramatic, expressive intensity, Melissa Errico is a Tony Award-nominated Broadway star -- an actress, singer and author who contributes regularly to The New York Times. The Wall Street Journal recently referred to her as a "nonpareil cabaret singer."